Home » Legislation » TODAY OUR CHOICE IS: (1) VOTE “NO”; or (2) CONTINUE TO LIVE UNDER A CORRUPT JUDICIAL SYSTEM!

TODAY OUR CHOICE IS: (1) VOTE “NO”; or (2) CONTINUE TO LIVE UNDER A CORRUPT JUDICIAL SYSTEM!

By Admin Legislation, Richard I. Fine 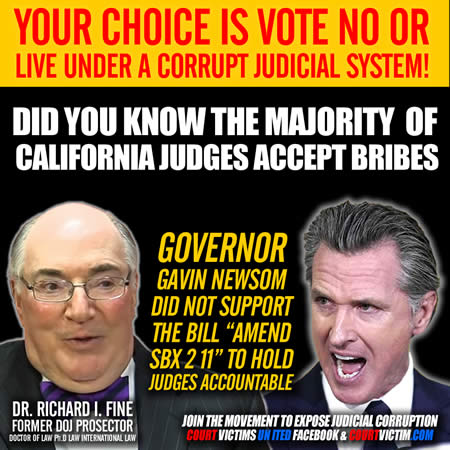 THIS IS YOUR ONLY OPPORTUNITY TO DIRECTLY END CALIFORNIA’S JUDICIAL CORRUPTION.

VOTE “NO” TO EVERY CALIFORNIA SUPREME COURT AND COURT OF APPEAL JUSTICE SEEKING RE-ELECTION.

VOTE AGAINST THE GOVERNOR AND EVERY INCUMBANT LEGISLATOR SEEKING RE-ELECTION.

Fine concluded: “The Campaign for Judicial Integrity with the cooperation of others drafted legislation which: (1) establishes a permanent independent state commission to oversee the judiciary and compensate the victims of judicial misconduct and judicial abuse of power; (2) establishes judicial term limits of 24 years; (3) requires all judges seeking re-election to appear on the ballot, even if unopposed; and (4) prevents judges who accepted illegal payments from further becoming judges or justices, amongst other things.”

TODAY OUR CHOICE IS: (1) VOTE “NO”; or
(2) CONTINUE TO LIVE UNDER A CORRUPT JUDICIAL SYSTEM!

HELP ADD TO AND SUPPORT THE NATIONAL COURT VICTIM DATABASE: Share with your Family, Friends and Anyone affected by Judicial Abuse
Tagged  Richard I. Fine.
Bookmark the permalink.